Venice, or the ‘Floating City’, is a magical little place. Built on over 118 islands in a lagoon, the city of Venice with its canals, bridges and palaces is one of the world’s most visited travel destinations.

Whether it’s the St. Mark’s Basilica located in the heart of the St. Mark’s Square, the Rialto Bridge, or the little islands of Burano and Murano there is so much to experience here! Flying Squirrel Holidays provides customised Venice tour packages from India to help you plan your next holiday to Venice.

The history of Venice dates back centuries ago. The merchant city was one of the richest trading powers in the world. The city is made up of 450 bridges, 120 islands and an endless maze of narrow, twisting streets.

The city’s beauty lies not in its historical monuments, but in its labyrinth of alleys, canals and bridges where one could just spend hours walking, admiring the city life. The numerous piazzas make for amazing resting spots in between the exploring. Venice is a pedestrian-only city, so you either walk or take a Vaporetto.

Venice is also one of Italy’s most important wine-growing areas and produces world-class wines such as Prosecco, Valpolicella, and Soave. The Amarone Della Valpolicella is the region’s fanciest wine and made with carefully selected grapes. It is among the most expensive red wines in the world.
There is a lot to do in Venice. For the history enthusiasts, you have the Basilica of St Mark’s, the bell tower, the Doge’s Palace and the St. Mark’s Square. With its many museums and galleries like Gallerie dell’Accademia, San Giorgio Maggiore and Ca’ d’Oro, it is also an art lover’s paradise.

One can also admire the rainbow of produce at the Rialto markets and check out the local seasonal products. The banks of the Grand Canal are perfect picnic spots to take a while to relax and unwind. For the perfect Italy wine tour, check out our custom Venice Italy tour packages from India. 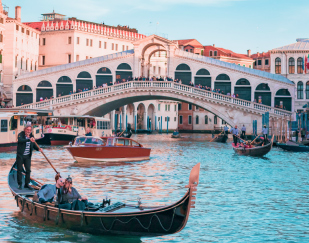 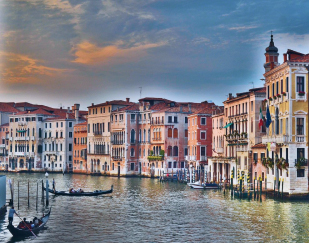 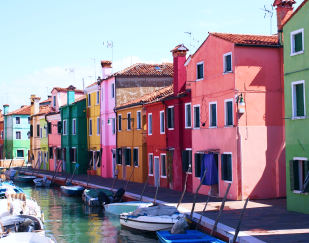 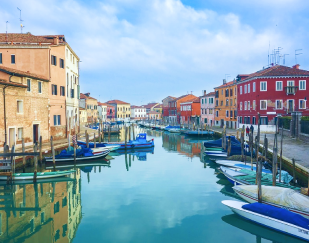 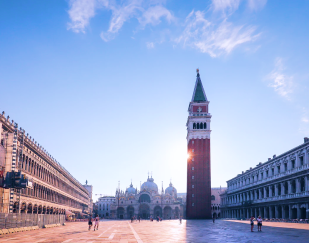 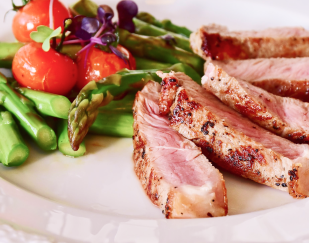 The Accademia Gallery of Venice is a must-visit for painting enthusiasts. It was built with the intention to bring together all the works of art that were scattered throughout Venice under one roof. It currently has more than 800 paintings from the 12th to the 18th century.

Ca 'Rezzonico, located on the bank of the Grand Canal in the district of Dorsoduro, is one of the most important buildings in Venice. A rich Venetian residence, it houses a valuable collection of 18th century Venice furniture and paintings.

A short Vaporetto ride from St. Mark’s, the San Giorgio Maggiore church offers stunning views of the entire Venice. One of the architectural glories of Venice, it is decorated with works by Tintoretto, Carpaccio, and Jacopo Bassano.

The Scuola Grande di San Rocco is a historic site in Venice, noted for its collection of paintings by Tintoretto, and includes some of his finest work.

Ca d'Oro is an ancient patrician palace that dates back to the 15th century and is a good example of the change from the Gothic to the Renaissance style of architecture. It houses a stunning art collection belonging to Baron Giorgio Franchetti.

The Basilica di Santa Maria Gloriosa dei Frari is one of the most astonishing churches in Venice and well worth visiting. The highlight of the place is a painting by Titian called “Assumption of the Virgin”. Other points of interest include the tomb dedicated to Antonio Canova.

Teatro La Fenice is an opera house in Venice, Italy and is one of "the most renowned landmarks in the history of Italian theatre." Get a chance to travel back in time to experience the golden age of Italian opera with a guided tour that is available for tourists.

Try Spritz, a classic Venetian aperitif. It is a mix of white wine, Aperol (sweeter) or Bitter Campari and Select (bitterer) and a squirt of Seltz or Sparkling water.

A gondola ride through the canals is a must-have Venetian experience.

Ride a Vaporetto to the smaller islands of Burano, Murano and Lido.

Try Sarde in Saor, a traditional Venetian dish that consists of sardines, onions and balsamic vinegar. It tastes quite strong but is sweetened by raisins, pine nuts and red wine.

Check out the glass blowing techniques in Murano.

St Mark’s Basilica is one of the most popular tourist sites in Venice and a must-see on any traveller's itinerary! It’s history that dates back to the 9th century A.D. The church is built in a Byzantine style. Its design was heavily influenced by eastern styles of the time.

There are more than 8,000 square meters of mosaics inside St Mark’s Basilica which were created over 800 years. The Pala d’Oro, a Byzantine altar screen of gold, is a marvellous sight here. It is studded with hundreds of gems like 1,300 pearls, 300 emeralds, 300 sapphires, 400 garnets, 100 amethysts, plus rubies and topazes.

It is the biggest public square in Venice and perhaps one of the most beautiful ones in the world. It is said that Napoleon once referred to it as the ‘Drawing Room of Europe’. The square is surrounded by some of Venice’s most important buildings.

You will find the Basilica of St Mark's, the bell tower and the Doge's Palace on the square. Sometimes there are small bands that can be found playing around the square. The lovely music adds to the ambience.

The Doge’s Palace is also home to the largest oil painting in the world. Measuring a massive 74 by 30 feet, Tintoretto’s heavenly masterpiece, Paradise is the largest painting done on a canvas in the world. It is a vision filling the entire wall behind the Doge’s throne in the Great Council room.

The Bridge of Sighs is one of the most famous bridges in the world. The bridge passes over the Rio di Palazzo and connects the Doge's Palace to the Prigioni, the prisons that were built in the late 16th century.

The bridge became the path by which the prisoners were transported from the prison to the inquisitor’s office. The popular belief of sadness and the sighs of condemned prisoners was what gave the bridge its name.

The Grand Canal is famous worldwide for its extraordinary beauty. The centuries-old palaces which stand on both sides of the water date to the 13th century, a time in which existed the Venetian Republic.

Approximately 3.8 km long, the Venice Grand Canal is the city’s busiest thoroughfare. It is the largest and most famous of Venice’s extensive network of canals. A tourist favourite, a romantic gondola ride along its picturesque waters is one of the most popular activities in Italy.

The San Polo district, Venice’s smallest sestiere, borders the Grand Canal and the sestiere of Dorsoduro and Santa Croce. It is popular for its famous fruit and vegetable markets in the mornings and lively bar scene in the evenings.

Burano is an island in the Venetian Lagoon famous for its colourful fishermen’s cottages and is a mere 40-minute ride from Venice itself. Summer or winter this wonderful place never fails to delight.

Burano’s little neighbour, Murano is famous worldwide for the exquisite, handcrafted Murano glass. Murano Glass is called art glass and the artists of this “blow” glassmaking are called maestros in Italian.

The Carnival of Venice

The Carnival of Venice or Carnevale di Venezia, like all other Carnivals around the world, takes place in the days leading up to Lent. It is one of the biggest celebrations in Italy. It attracts thousands of tourists every year who arrive in Venice to admire the extravagant costumes and exquisite masks parading in the streets.

Venice Carnival is especially famous for its beautifully ornate masks. The masks are given elaborate decorations and details and no two masks look the same.

(Please note that this is a sample itinerary. Our Venice tour packages from India are customisable to suit your preferences.)

Start off your first day from St. Marks Square. First, climb up the St. Marks Campanile which stands at 325 feet tall and towers over the St. Marks Square. From the top of this tower, you can get a fantastic view of the piazza. While you are up there you will also find some of the original bells that once rang out when it first opened. Next, take a short walk away from St. Marks Campanile to the historic St. Marks Basilica. After a guided tour exploring the basilica, visit Doges Palace, the seat of political and administrative power of the Venetian Republic. An architectural fusion, this monument was a blend of contemporary and primaeval eras and adds to the splendour of Venice. Take some time to explore the square itself. The place has numerous cafes, like the Gran Caffe Lavena. This historic cafe offers many different meals, cocktails, coffees, and sweet delicacies. After strolling around St. Marks Square, make your way to Dorsoduro. This small town houses a collection of museums, churches, galleries and vintage boutiques. Visit the Gallerie dell Accademia, home to several pieces of pre 19th century art and paintings. Other places here are Ca Rezzonico, San Sebastiano, Basilica di Santa Maria Della Salute and Scuola Grande dei Carmini. To end your first day of the tour, visit one of Venices oldest bridges. Built back in 1588, the Rialto Bridge features over 3 different walkways on it which give you various views of the canal and city. You can stop by the Rialto Market nearby which sells fresh fruits, vegetables, and fish.

Start off your second day in Venice with the Peggy Guggenheim Museum. Situated on the edge of the Grand Canal, this place was once a former palace. It was home to Peggy Guggenheim, a lover of modern art. Next up is a Grand Canal cruise to the picturesque islands of Murano, Burano, and Torcello. As you float along to Burano, you will see the vibrant fishermen houses that are scattered throughout the island. Head over to the Campo Santa Maria Formosa to see the Basilica dei Santi Giovanni e Paolo. Known locally as San Zanipolo, the Basilica was finished in 1430 and is one of the largest churches in Venice. Observe its spectacular architecture, pillars, and remarkable mosaics and frescoes. End your tour in Venice on a classic note with a romantic Gondola Ride along the Grand Canal. The perfect time for a gondola ride would be early evening when the sun is just about to set. With the sky changing into hues of pink and orange, the beauty of Venetian waterways becomes exceptionally picturesque.

Venice falls on the higher end of tourist destinations economically. There are beautiful accommodation options available in various categories including luxury hotels, boutique hotels and budget hotel at Venice.

You get amazing views especially from hotels near the Grand Canal. Food in Venice is expensive, especially around the popular tourist spots. The cost might vary according to the duration and the accommodation category.

At Flying Squirrel Holidays, we provide customised Venice holiday packages according to your budget and preferences. We also provide with tailormade Italy tour package which includes a trip to Rome and Venice.

What is the best time to visit Venice?

The months of September to November in early autumn and late spring season, which lasts from March to May is the best time to visit Venice. The weather is perfect during this time.

Which places shouldn’t be miss visiting in Venice?

The places in Venice that shouldn’t be missed visiting are St. Mark’s Basilica, Palazzo Ducale, and Grand Canal.

What is Venice famous for?

The real beauty of Venice does not lie in its many museums, palaces, or art galleries, but lies in the maze of little alleys and streets where you can just spend hours walking. Watching the golden sunset from a charming gondola while the gondolier sings traditional Venetian songs to you is a picture that’ll stay with you for a long time.