When Madhuri Dixit, a renowned Indian movie star, tweaked in her YouTube channel an old saying of an Irish priest about prayers, it found massive resonance among the people. It pretty much re-iterated what the Parents’ Magazine; a highly respected mass-circulation American publication had famously said earlier.

Sometimes, it takes wisdom to pour from unexpected quarters for people to sit up to the obvious.

Families need frequent jamming sessions beyond the tired forced weekends. What better way than the dedicated holidays to the theme parks.

Theme Parks Holiday Packages from Flying Squirrel Holidays is the best way to set out for your ‘fam jam’ sessions.

The shrieks of nervous laughter of children as they glide on the convoluted rides through the twists and turns in the amusement parks are a source of divine pleasure to their parents. In fact, the adults find the exciting rides no less enticing themselves. Children are a good excuse to let out the child in their own self while they bunk their adult work to be part of the excitement.

But theme parks are not just the fun-filled rides in the amusement parks.

Theme parks go much beyond the rides and games of the amusement parks. Unlike amusement parks, theme parks weave a unifying central theme around the structures and attractions in an area in the park. There could be numerous areas within a park with different themes.

Whatever the predominant theme, a theme-park has to have a combination of themed attractions including architecture, landscape, entertainment, outlets serving food and beverages, stores and boutiques,costumed staff and the creation of an ambience that distinguishes itself from the world outside its gate. Most have resorts too.

Been there. Done that.

You can never say this about theme parks.

No matter how many times you have gone on family holidays in theme parks, you will never run out of destinations to visit.

Water-based theme parks have all the exciting amusements built around water. Pools and fountains, glides and roller coaster making splashes in the water are the fun activities of the theme. Aquatica at Sea World, Orlando, is a prime example of it.

Children love to splash in the water. Let them their little wet-n-wild joys while you indulge in the child within yourself.

Adventure parks have attributes of thrill, excitement and fear. Falling from a height is a popular theme with amusement enthusiasts. Jumping, dropping, soaring, sliding and swaying are the thrilling rides in these kinds of theme parks. Zero Gravity, Dallas, US, is a good example of this.

Ride the thrills with your children and get the ‘my-daddy-bestest’ certificates from them.
Robotics, science and futuristic technology are great fun and ‘edutainment’ themes that have taken over theme parks in a big way. Epcot at Orlando’s Walt Disney World is a popular example. The Gyeongnam Masan Robot Land in South Korea is entirely dedicated to robotics.

Let your children’s curiosity take-off with fun-filled edutainment into how their world will be in future and be awed by the speed with which children learn new things.

Fantasy-based theme parks with animations and cartoons characters, fairy tales,magic and a make-believe world are everybody’s favourite. Dwarfs, elves and imps, goblins and gypsies, demons and dragons performing live in an interactive way with the children at the Evermore, Utah, US,carry them to another world of fantasy. Mickie and Donald and Goofy tickle your funny bones at the Magic Kingdom, Florida.

Let your children mind expand to fill the entire of their fantasy and be a part of their journey too.
Nature-based theme parks are based around animals, wilds, oceans or sea-life. The popularity of zoological theme parks is evident from the fact that most parks have some kind of zoo experience attached to them.
It is fun with the children; it is fun with the grown-ups too.

Some parks however make animal interaction their main plank and create ride experiences that unobtrusively meld with the animal fun.

A good example is the Kolmarden in Sweden with its Safari Gondola riding high above the animal enclosures living in the lush forests amidst glimmering lakes and sharp rocks. Bosch Gardens, Tampa is another. Ocean Park, Hongkong presents itself as a sea mammal park.

Let your family loose itself in the cuddle of mother nature in the company of fascinating animal life. It’s bliss.

History and culture are also theming of a park. The Historic Deadwood recreates the wild west. Holy Land Experience at Orlando, Florida, recreates Jerusalem of the ancient times complete with the architecture and artifacts of the time.

Give in to your pangs of nostalgia while your children are let into the world that was.
Adult theme parks for 18+ have their patrons too. Loveland in Jeju Island South Korea, with 140saucy statues and the Bud and Breakfast, Colorado, the first cannabis resort is some of them.

There are some quaint ones too. The Hershey Park, Pennsylvania has rides and restaurants and a roller coaster built around just the theme of chocolates. 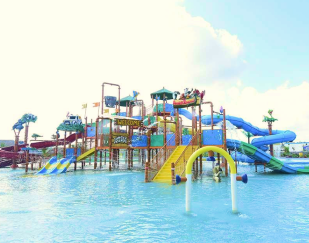 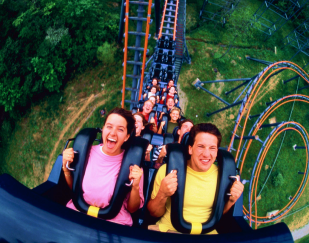 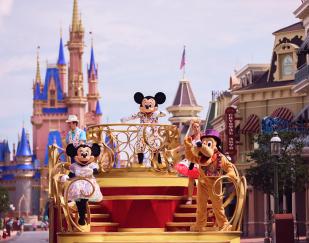 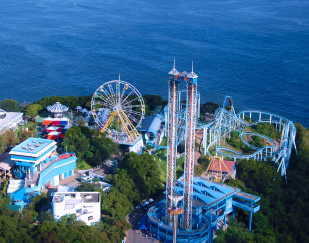 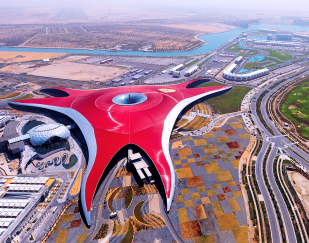 Half a billion. That number was crossed in 2018.
That is the number of people who attended theme parks the world over. According to TEA (Themed Entertainment Association), of the top 15 most visited theme parks globally, 10 carried the name Disney, 9are located in the US.
The US, therefore, stays the big daddy of theme parks attractions. Visit to these parks are the highlights of any theme park holiday packages.

At the Magic Kingdom. Space Mountain, the roller coaster ride in the dark into outer space with stomach-hollowing big drops and Splash Mountain, the musical ride with 3 dips in water and 5 story drops ending with a splash. For younger kids, there is the Astro Orbiter spinning rides and the slow ride of the Big Thunder Mountain Railroad for the less adventurous.

At the Animal Kingdom. African Savana tour, the Kilimanjaro Safari and The Dinosaur, a treacherous race to pre-historic times to save dinosaurs before there is a strike on the earth from the meteors on a rugged Time Rover vehicle.

At Epcot. Play with the dolphins with Epcot Seas Adventures and watch how they are trained even if you don’t know to swim.

At Magic Kingdom. Go to the invite from Mickey to the Mickey and Friends Cavalcade where they turn the parade into a revelry. And don’t disappoint Goofy too as he calls you to celebrate a magical day with him at A Goofy Cavalcade. Meet and chat with Disney Princess.

At Disney’s Hollywood Studios. Embark on the journey to the iconic Star Wars destinations on a 3D motion-simulated flight.

At Universal Orlando Resort. Manoeuvre through the dangerous subterranean vaults and encounter Harry Potter and Ron on the way on the 4D motion simulated ride at the Wizarding World of Harry Potter.

The Haunted Mansion, a classic haunted dark ride at Disney Anaheim and the supernatural forces at The Twilight Zone of Terror in Disney Orlando are the spooky attractions.

At Epcot. The Universe of Energy, an edutainment that makes us realize the importance of the sun as an alternative source of energy and the Test Track explains the way engineers and scientists find solutions to problems by controlling the variables.

NOTE: This is just a sample itinerary. Your itinerary can be customized according to your tastes and preferences.

Arrival at Orlando Airport. You will be received and transferred to the hotel. Day on your own.

An escorted tour of Hollywood Studios. Then to Animal Kingdom, both pre and post-sunset.

An escorted tour of Magic Kingdom.

An escorted tour of Epcot.

An escorted tour of Universal Orlando Resort. In the evening, transfer to the airport for a flight to California. In California, you will be received and transferred to the hotel in the precincts of Disney.

An escorted tour of The Universal Studios Hollywood.

An escorted tour of The Disneyland Park at Anaheim.

Day on your own and transfer to the airport for a flight back home with pleasant memories.

Disneyland property in Florida alone is spread over 25000 acres of land with 4 theme parks, 2 water parks, 8 big and small golf courses, 28 Disney resorts and places for shopping and dining. The cost will depend on the duration of the stay and the class of resorts you select along with the number of paid rides you opt for.

The plethora of choices available and the enticement to take in everything makes it difficult to plan your budget on your own. We at Flying Squirrel Holidays have specialised people who can work out the best value for money trip for you according to your budget and disposition.

We have theme park vacation packages that we can customise for you. Let the budget not be a restrain from giving your family a holiday they will cherish.

What is the cheapest way to book a Disney vacation?

The cheapest way to book a Disney vacation is to go camping and stay at the Disney’s Fort Wilderness. But that is not the option when you travel thousands of kilometres to give your family a holiday to cherish. Through years of experience, we at Flying Squirrel Holidays, manage to get the best deals in flight, accommodation and transfers. Let us plan your theme park holidays to Disney for a no-bother value-for-money memorable holiday.

Which country has the oldest theme park?

Denmark has the oldest theme park in the world. It is located in Bakken, North of Copenhagen. It has over 150 rides.

Which is the safest amusement park in the world?

Canada’s Wonderland is said to be the safest amusement park in the world. In its life span, there have been no deaths, accidents, or personal injuries.

Don’t just go on a holiday.