Kerala’s moniker of ‘God’s own country’ does it justice. The thin strip of land, flanked by the Arabian Sea on one side and the mountains of the Western Ghats on the other holds immense richness of resources and experiences, making Kerala tour packages popular across visitors of all ages.

The landscape, people, cuisine, culture and retreats all beckon tourists from far and wide and no one leaves the state without falling in love with it.

The cooler months between October and March are generally considered to be the best to discover the varied charms of Kerala as the low humidity and pleasant temperature make the canals, backwaters and beaches even more enjoyable, and the plantations are in their peak beauty. However, summer is the best time to visit the hill stations of the state as they offer a respite from the hot weather of the plains.

Kerala tour places are well known across the country and seldom need an introduction to any avid traveller. There is the ‘Venice of the East’, Alleppey, with its tranquil backwaters, which is a favourite of couples. The modernised version of the Kettuvallam boats float languidly on the network of lagoons and waterways in this city, offering luxury, great views of the coconut trees and paddy fields, and unique angling experiences.

Munnar, in the Western Ghats, is one of the most famous hill stations in Southern India, and the criss crossing of its three rivers amongst rolling valleys and hills and clear skies make it ethereal. Filled with warm homestays and luxury resorts, Munnar is another frequently visited honeymoon destination in Kerala.

Kerala’s 580 kilometer long coastline has some of the best beaches in the country, and are often chosen as alternatives to the beaches of Goa. The beaches offer something for everyone. Varkala Beach is one of the less crowded, quaint ones, and is a great place to unwind.

Travellers have started flocking to it in recent years, but it still remains one of the quieter places in the state, and is especially favoured by couples. Bekal Beach in Northern Kerala is the best place for an opulent beach getaway, with a number of five-star resorts opening their gates.

The well known Kovalam beach tour remains the best in the state for an active beach trip. It is well developed and is considered to be the premier surfing destination in India. Ayurvedic retreats dot its shore, and getting a relaxing massage from a trained professional is sure to work wonders. The lighthouse standing on the Lighthouse Beach offers mesmerizing bird’s eye views of the horizon.

Kerala is also known for its lush spice, coffee and tea gardens. Cardamom, vanilla, ginger, cinnamon, nutmeg and pepper are cultivated in the farms, and a visit to these are a must while on a South India trip. Guests can enjoy long nature walks in the gardens, with the aroma of the spices lingering potently in the air, and even try the flavourful produce.

The farms are a haunt of rare birds and many bird watchers visit the plantations to spot these species.The tea gardens in Munnar are among the highest in the world, while the coffee plantations in Wayanad are unmatched. There are cozy stays located in these coffee estates, and they allow you to fully appreciate the beauty of nature while sipping a hot cup of fresh brewed coffee every morning.

Kerala is a delight for wildlife enthusiasts, with a wide variety of plants, trees, animals and birds calling the state their home. Periyar Wildlife Sanctuary is one of highlights of wildlife tours in Kerala, and the park has a healthy population Golden Langurs, Elephants, Sambhars, Gaurs, Deer, Lion tailed macaques and Tigers.

Apart from the usual jeep safaris, visitors can opt for a boat safari on the Periyar Lake and catch sights of elephants and deer. The Neyyar Wildlife Sanctuary is an off the beaten track park, and its small size holds immense richness. Sloth bears, leopards, tigers and elephants are found in good numbers here, and guests can even undertake Lion Safaris. The park has a crocodile farm which is home to mugger crocodiles.

The Thattekkad Bird Sanctuary is a delight for birdwatchers, and has been described as the richest bird habitat in Peninsular India by Dr. Salim Ali, the renowned ornithologist. Species such as the Racket Tailed Drongo, Malabar Parakeet, Malabar Grey Hornbill, Rufous Babbler and Yellow browed Bulbul can be spotted here.

Kerala has a huge range of charms and it is next to impossible for someone to not find something to love in the state. Flying Squirrel Holidays specializes in personalizing tour itineraries according to everyone’s individual tastes, making sure that every person has the best vacation possible in God’s Own Country. 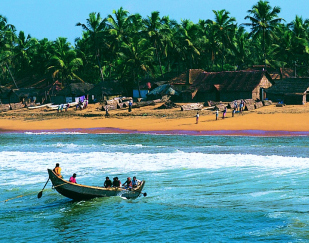 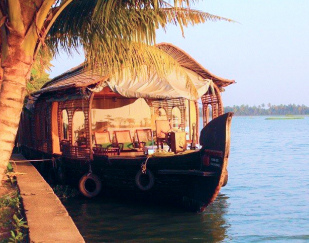 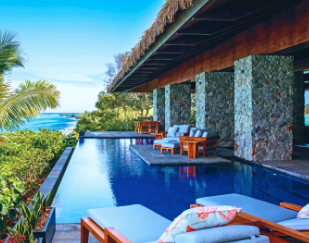 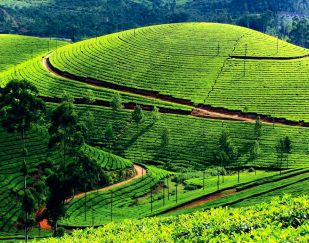 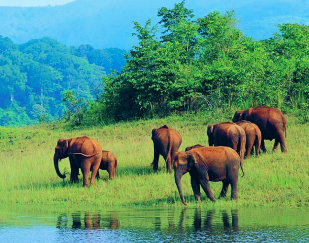 One of the most serene places in the state, Kumarakom is a group of islands famed for its backwaters. While Alleppey has houseboats, Kumarakom has pristine views of untouched nature. There are a lot of ayurvedic massage centers in the area, and these are a good way to unwind. The lake on which the islands are situated, Vembanad Lake, has good opportunities for angling and boating. The Kumarakom Bird Sanctuary, one of the finest in the state, is located close by too.

The mystical town of Wayanad is among the top places in Kerala. The hilly area has many campsites and trails and is loved by those wanting a break from urban life. There are a number of waterfalls, and along with the surrounding verdant hills and rock formations, the town is absolutely magnificent. Edakkal Caves is a major tourist attraction in Wayanad, said to have originated from a split rock, and it has beautiful carvings inside. The coffee plantations of the town are lush and there are many local shops selling good quality coffee, spices and honey.

The port town of Kochi is a must visit place in Kerala. Its long history with the Dutch, the Arabs, the Portugese and the Chinese has made it an immensely interesting historical destination, and its cultural highlights are unforgettable.The Mattancherry Palace, built in 1555, houses portraits of the Rajas of the bygone days, along with beautiful murals depicting scenes from the Ramayana and the Mahabharata. To explore the rich culture of Kerala, one must visit the Kathakali Center to catch a performance to the dance form. The dances revolve around themes from the ancient Hindu epics and are fascinating. The city is also a great place to enjoy delectable South Indian food.

Take a spice tour in the spice plantations of Munnar.

Pick up some local coffee in Wayanad.

Take a jeep safari or a boat safari in the Periyar.

Enjoy the architectural beauty of Kochi.

Spend time unwinding at the beaches.

The three crescent beaches are amongst the top tourist attractions of Kerala, each separated from the other by rocky outcroppings. Hawa Beach and Samudra Beach are the less crowded of the three, overlooking the majestic sea and offering stunning views of the sunset. Lighthouse Beach is the favourite of tourists, hosting popular activities like paragliding, surfing and parasailing. There are a number of churches and temples in Kovalam, and they are all worth a visit.

The Athirappilly Falls is the largest waterfall in Kerala and is locally called the Niagara of India. The falls are 80 feet high and surrounded by bright greenery, making it a great picnic spot. The Vazhachal Falls is located close by too, and it is particularly renowned among the bird lovers’ community, for it has many rare species inhabiting the forests nearby. Both the waterfalls are mesmerising.

The Chembra Peak in Wayanad is a tourist favourite. It is the highest peak in Wayanad and is absolutely marvellous visually. The trek up to the peak is beautiful, with the trail passing through waterfalls and thriving forests. The famous heart shaped lake draws a lot of visitors. The top of the peak has views of Wayanad, Nilgiri district and Kozhikode, and overall, Chembra is one of the best places to trek in Kerala.

Please note that the following is a sample itinerary.

Arrive at Kochi and transfer to Munnar. The road to Munnar is scenic and we make a stop at the scenic Cheeyappara Waterfall. On reaching Munnar, check in to your hotel and enjoy the day at your leisure.

Enjoy a hearty breakfast in the hotel. Towards noon, start sightseeing around Munnar. Visit the Cinnamon Gardens Spice Plantation and learn about how spices are cultivated, or enjoy a long nature walk among the aromatic plants. Head to Mattupetty Dam and Kundale Lake during the day. The rest of the day is at your leisure.

Following breakfast, head to Rajamalai to try and catch a glimpse of the elusive Nilgiri Thar. After lunch, visit Top Station and enjoy the scenic views of the surrounding areas. Spend the rest of the day relaxing.

After an early breakfast, start on the drive to Kumarakom. Check in to your hotel and visit the Bird Sanctuary and the backwaters during the day. Overnight stay at the hotel.

Head to Kochi after breakfast and spend the day sightseeing the city. The city is filled with cultural and historical delights, and you are free to explore it by yourself.

Following breakfast, drive to the airport to go back home.

Kerala offers a host of experiences and the cost of visiting it varies significantly on multiple factors. For example, one could stay in a modest guesthouse under a tighter budget, but staying in a houseboat is bound to be pricier.

Similarly, if one’s trip falls within the peak tourist months of October and March, the budget will be markedly higher. Flying Squirrel Holidays specialises in making trips as per your budget, so reach out to us for more details.

What is the best time to visit Kerala?

The winter months between October and March are generally considered to be the best to visit Kerala. However, the summer months are also great for visiting the hillier areas of the state.

Which is the coldest month in Kerala?

November to February are the coldest months in Kerala.

Which are some of the must-visit places in Kerala for couples?

It is a bit difficult to answer because you cannot choose one. The USP of Kerala is that you find different landscapes in one state. You have tea plantations in Munnar, the backwaters of Alleppey, and the beaches of Kovalam. It depends on you what kind of terrain you like the most that defines your most beautiful in Kerala. In short, there are plenty of must-visit places in Kerala for couples.

A visit to God’s Own Country is sure to leave you astounded with its many charms. Kerala packs a wide variety of experiences within its borders and there is something for every traveller to enjoy here. The beaches are clean, serene, and stunning, while the hills are covered with lush green plants. The bustling cities are the hub of culture, architecture and gastronomy, and the backwaters are absolutely mesmerizing. Spend some time in Kerala and you will never be able to forget the days!