Situated in the African Great Lakes region, Tanzania is a perfect blend of beauty and adventure. With a mix of savannahs, a snow-capped volcano, lush forests, game drives and scuba diving in the Indian Ocean, Tanzania makes for a perfect holiday destination for you and your family.

Tanzania is home to not just Africa’s most famous national parks, such as the Serengeti National Park and the Manyara National park, it also offers beautiful beaches, mountains and UNESCO World Heritage Sites.

The country is popular on the world travel map for the  wildlife adventures it offers but those of you who choose to relax here can head to the beautiful beaches of Zanzibar and enjoy some scuba diving and snorkelingin the crystal -clear waters of the Indian Ocean.

The island of Zanzibar is also popular for its spice trails and has the ancient Stonetown that boasts of colourful homes with typical wooden Zanzibari doors and rich coastal cuisine.

The annual Great Wildebeest Migration across the plains of the Serengeti in Tanzania is a once-in-a-lifetime experience for travellers around the world. During the migration more than two million wildebeest, zebras and gazelles move through the Serengeti and also the Masai Mara ecosystems in search of green pasture, in a regular pattern. 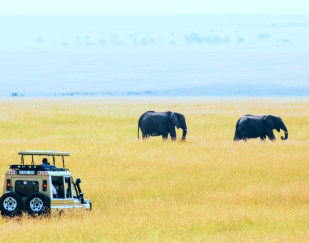 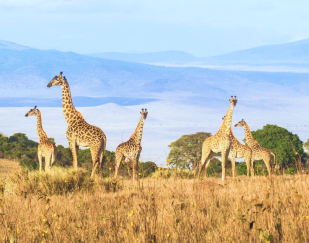 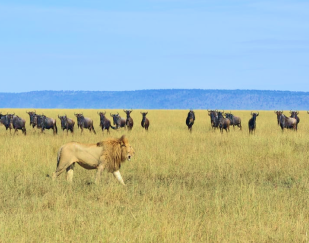 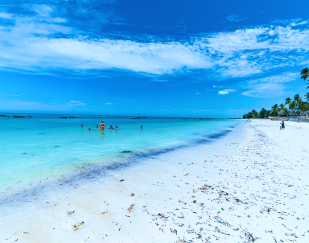 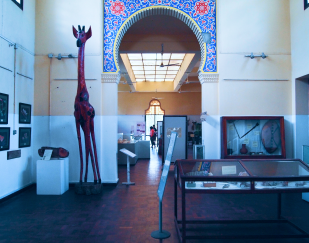 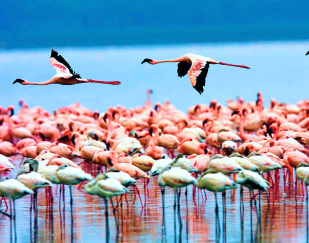 Serengeti, another world for wide endless plains, is a UNESCO World Heritage Site and a biosphere reserve since 1981. It has the greatest concentration of wild animals on the planet and is the sanctuary for the world’s largest annual mammal migration.

Nowhere in the world will you find such rich predator and prey interactions. The rich animal diversity and the 530 species of birds you find here leaves a lasting impression on your mind. There are several ways I which you can enjoy the unique animal diversity here – through game drives, walking safaris, and hot air balloons.

When in Serengeti don’t miss sightings of the Big 5 – the lion, leopard, elephant, buffalo and black rhino as well as the giraffe, Grant's gazelle, impala, kongoni, topi and eland.

What was once an active volcano, is now a craterand is one of Tanzania's most popular wildlife viewing areas. The Ngorongoro Crater is the largest intact ancient caldera in the world, and is nearly three million years.

It has a permanent supply of water, and it is interesting to see how the crater attracts thousands of animals who stay in this area rather than migrating.A perfect place for viewing large animals and birds, spend a few days in this place.

Often a stop on the way back from the Ngorongoro conservation area, the national park with the beautiful Lake Manyara has over 400 types of birds and not to mention other wild animals.

The Manyara National Park gives you the perfect opportunity to take beautiful photos of the flocks of flamingos, hence often referred to as the pink lake.

The national museum holds within its walls some of the finest artifacts and cultural exhibits representing the beautiful country, Tanzania and its rich natural history. The museum houses natural and historical wonders and provides an educational experience for kids and families alike.

Mount Kilimanjarois Africa's highest peak (5,895 m) and Tanzania's most iconic image. Mount Kilimanjaro National Park, unlike other parks in northern Tanzania, is not visited for the wildlife but for the chance to stand in awe of this beautiful snow-capped mountain and, for many, to climb to the summit.

Mount Kilimanjaro can be climbed at any time, although the best period is from late June to October, during the dry season.

Game drives in Serengeti and witness the Great Migration

Spend an afternoon at a Masai village

Relax on the beaches of Zanzibar and enjoy fresh seafood.

Visit the local bazaar at Arusha city. Buy beautiful artisan artifacts as well as clothes that symbolise the beautiful country of Tanzania.

(Please note that this is a SAMPLE itinerary. Our Tanzania tour packages from India are customised keeping in mind your preferences and needs.)

Fly into Kilimanjaro International Airport from India. Brace yourself for a fantastic time. Once you touch down, you will be greeted by the local guide and taken to Arusha city, which is 46 kms away from the airport. Take in the sights of the city and check-in at the hotel.

From Arusha drive to Serengeti National Park. On your way you can stopby the Ngorongoro conservation area. They say that the best way to know and love more about Tanzania is to take a road trip through the country.

It takes about two to three hours usually to explore the crater to gather in the sights. Once here, have some lunch at one of the hotels situated near the rim for a brilliant view of the crater.

The drive to Serengeti usually takes about eight hours, so you will be checking into a lodge to stay overnight. You will then be taken to Serengeti the next morning for safaris and sightseeing.

Witness the endless plains of a UNESCO World Heritage Site, Serengeti National Park of the beautiful country Tanzania. See the big cats in their natural beauty traversing the savannah plains. Once here, you can check into a lodge nearby for two nights and one day to explore Serengeti.

From Serengeti, you will be taken to Manyara National Park to see lake Manyara in its pink beauty. Considered to be a bird watchers paradise, it won't take long to spot the flock of flamingos and the various other kinds of species that hang around the area.

You could spot a rhino or two. There are flights that run from the national park to Zanzibar where you can treat yourself to a relaxing walk on the powdery beaches. What better way to end the trip of safaris and say bye to the beautiful country of Tanzania than to spend a day on the Zanzibar beaches.

After spending a night at Zanzibar, prepare to bid farewell to the country and your guide. Hope you had a fabulous time with us.

Prices depend on the duration of the holiday and the properties you choose. Booking in advance before peak season is advised if you’re on a tight budget and if it involves a larger group of people, it might help with the budgeting as well.

We at Flying Squirrel Holidays can tailor your trip as per your budget.

How can I go to Tanzania from India?

By air, you can fly into the Kilimanjaro airport or the Dar es Salaam airport or Zanzibar city airport.

What is the best time to visit Tanzania?

Considering migration patterns and the weather, the perfect time to travel to the beautiful country of Tanzania would be somewhere between July and October.

Is Tanzania safe to travel to?

Any country has its own share of troubles, but that being said, it is a safe destination all things considered. One has to take precautions wherever they may be and be vary of the present happenings around the border.

Are you looking for exciting travel offers to Tanzania? Look no further, here at Flying Squirrel Holidays, you can get perfectly tailored Tanzania tour packages. Find out our exciting offers on travel packages.