Gir National park is home to Asiatic lions and leopards, along with baby crocodiles, which make this place the most sought-after wildlife destination in India. The forested area and hilly terrains make it a perfect abode for animals like deer, jackals, leopards, and antelope.

Gir plays a crucial role in the sustaining and preservation of the species. If you want to enjoy a jungle safari and interact up close with the Asiatic lions, then booking a Gir National Park tour packages with us is highly recommended.

Gir National Park is a perfect place to have an unforgettable wildlife experience. Samsan Gir or Gir National park is located in the Indian state of Gujarat, to the south-east of Junagadh. The forest is covered to almost 1,412 sq. km of land which comprises majestic Asiatic lions, leopards, and a wide range of birds and mammals.

The National Park was established in 1965. The history of The Gir National Park dates back to the 1900s when the Park used to be managed by the Nawabs of Junagadh. Since then, the Asiatic lions are kept protected in the Park. Gir National Park has a rich ecosystem. This scrub dry land is known to be the largest deciduous forest present in India.

The Asiatic lions used to be found in other parts of Asia, which is not the scenario anymore. They cannot be traced in any other place except the Gir National Park, making this place very unique.

It is to be noted that the condition of public road transport from Junagadh or Ahmedabad/Rajkot isn’t very comfortable. The suggested mode of transportation to the Gir forest from these places is private vehicles, which are easily available from the airport or railway station.

Gir National Forest is the hotspot for wildlife enthusiasts and nature lovers.  The wide deciduous forest,Asiatic tigers, leopards, and crocodiles are the USP of this place. Gir is perfect for a weekend trip with friends and family. 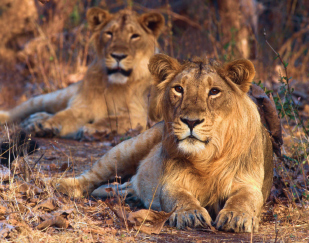 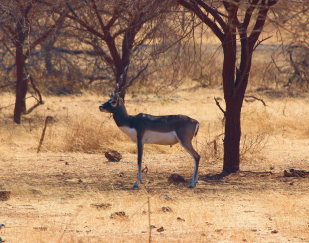 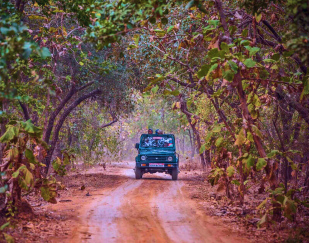 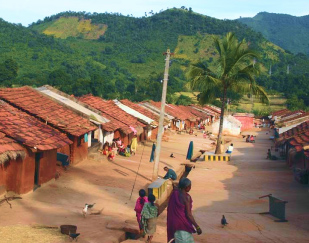 It's a paradise for all the wildlife photographers and wildlife enthusiasts as the lions here don't regard humans as threats and are quite camera friendly! So, gear up with your cameras to capture the king of the jungle in their natural wilderness. Soothe your mind and soul with a trip to Gir National Park or SasanGir.

There are eight major zones, open for tourists, to explore in the National Park. These zones are- Zone 1, Zone 2, Zone 3, Zone 4, Zone 5, Zone 6, Zone 7, and Zone 8. The most popular zones among the tourists are Zone 1 and Zone 3. You will have to get a permit to enter the National Park.

The permits can be booked online through this website as Gir Forest does not allow on-spot booking. After booking, the zone in which you will be taking your safari will be randomly provided by the authority.

You can go for a short safari at the Gir Interpretation Centre to have a sight of almost all of the animals that can be traced in Gir National Park. It is a comparatively smaller area than that of The Gir National Park.

Gir Interpretation Centre is more of a park sort of setting. It was constructed to give a better understanding of the ecosystem of the Gir and the animals found there. It is convenient to spot major animals like lions and leopards.

In the year 1977, the Indian Crocodile Conservation Project was started in SasanGir. Gir National Park houses the largest population of marsh crocodiles.

The management of Gir National Park along with The Gujarat State Forest Department has been taking adequate measures to conserve marsh crocodiles.A small area near the National park is used for preserving the crocodiles.

The sight of the baby crocodiles is just heart-warming. A visit to the Crocodile Breeding Farm will add an extra flavor of wilderness to your Gir National Park Tour package.

Unlike most of the other national parks of India, there are no Canter or Elephant Safari in Gir National Park. The National Park can be only explored only by Jeep (Gypsy) safaris. Although there are options of exploring this majestic wilderness through the bus as well, yet, the most preferred mode of Jungle Safari is the gypsy ride.

Safari on an open roof gypsy and spotting the lion is itself an out of the world experience.
The Jeep Safaris can be easily booked from the hotel in which you will be staying.

The morning safaris are the most preferred ones as they provide a marveling view of sunrise from the National Park. Mornings are also considered the best time to spot the lions as they often come out in the morning in search of prey.

Gir National park is known as the kingdom of the lions. The sight of Asiatic lions roaming freely is a very common view in Gir National Park.

Thus, the best time to visit Gir National park is the winter season, as the temperature remains very ideal during this time. The Gir National Park remains closed from 16th June to 15th October every year as safari isn’t possible during the monsoon season.

(Please note that this is just a SAMPLE itinerary. Our Gir National Park Tour Packages Itinerary can be customised as per your preferences.)

After you reach Rajkot /Ahmedabad you will be taken to your hotel. The evening will be free for you to explore. Visit the local markets and get amused by the colourful culture and tradition of Gujarat.

After your breakfast, you will head towards Gir National Park, which will be a seven-hour ride. After you reach the National Park,check in to your hotel and take some rest. After your lunch, you will be taken for an evening jungle safari to witness the majestic king of the jungle. The evening safari is best for bird-watching.

Start the day with an early morning jungle safari. The morning safari is the best time to spit lions as they usually come out of their caves to look for their prey. After your lunch, head over to the Crocodile Breeding Farm, and meet the cutest baby crocodiles.

Visit the Gir Interpretation Centre in Devalia and enrich yourself with the knowledge of ecosystems, found in Gir. You can also spot tigers and leopards in the park.

Relish your taste buds with authentic Gujrati Food in the tribal villages where the Maldharis and Siddis reside. Enjoy the evening among the locals, their culture as they perform their local tribal dance only for you. After a delicious dinner, head back to your hotel.

This will be your last day in Gir National Park. The morning time is free for you to chill near your resort. You will be taken back to Ahmedabad/Rajkot after your lunch which marks an end to yourtour.

The nearest airport to Gir National park is Diu. There are two more airports- Rajkot and Ahmedabad which are near the Gir National Park. Although these two airports are at a considerable distance from Gir as compared to Diu, yet it is more preferable because of their connectivity with other major Indian cities.

There are regular flights to Ahmedabad, Rajkot, and Diu from all over the country. The flight fares will depend on the airlines and the place of your departure. How much in advance the tickets were booked, is another important factor.

The nearest railway station to Gir National Park is Junagadh. Junagadh is well connected with Ahmedabad and Rajkot, which further have good railway connectivity throughout the country. The cost of train tickets will again depend on the type of coach you choose and the station you depart from.

Your accommodation will depend on the category of hotel or resort you wish to avail of. Typically, the five-star hotels and resorts are on a higher side. An additional cost for a Jungle safari as well as Gir Safari Cost will also incur.

Which is the best time to visit Gir National Park?

The best time for Safari in the Gir National park is the winter season.

Yes, a safari in the Gir is safe because the safaris are conducted by properly trained guides. There are multiple tracks with cameras monitoring the tracks. The forest rangers are well aware of the jungle and before going for a safari, all the necessary precautions are taken.

What is Gir forest famous for?

Gir Forest is the largest home of Asiatic Lions.

How to plan a Gir forest trip?

No, private vehicles are not allowed in Gir National Park. The national park can only be explored via Jeep (gypsy) safari and by bus.

How do I book a safari in SasanGir?

It's quite easy to book a safari at SasanGir National Park.The hotel in which you will be staying can be booked for you without any hassle. You can also contact Flying Squirrels Holidays to plan a hassle-free safari and a trip to National Park.

The enduring greenery and the majestic wilderness will leave you mesmerized. Gir is indeed one of the most popular wildlife destinations for Indians as well as foreigners. The trip is a treat for all nature lovers, wildlife and photography enthusiasts, bird watchers, and environmentalists.