With green valleys spread over endless vineyards, ancient churches and fascinating mountains, Georgia in recent times has fast evolved from a one-night stopover to a full-fledged holiday destination. Nestled between the Caucasus Mountains and the Black Sea, Georgia is packed with stunning landscapes, warm and welcoming people, delectable cuisine and ancient cities steeped in history and culture.

A trip to Georgia is highly recommended for all those who marvel in the serenity of nature and admire rich culture. Wine lovers are in for a special treat as Georgia claims to be the birthplace of wine!

Located on the westernmost border of Asia, Georgia is trapped between the charming Black Sea and the magnificent Caucasus Mountains. The Georgian civilization is one of the oldest in the world with a history that can be traced back to the early 11th century.

In recent times Georgia remained a Russian Colony until it gained independence in the early 1990s. Post independent Georgia witnessed a bitter civil war and unrest until peace was restored with The Rose Revolution in 2003.

Modern day Georgia is both peaceful and travel friendly. In fact, it can easily be considered a perfect family as well as romantic destination. Georgia offers several relaxing and kid-friendly experiences.

Go for a roller coaster ride on the giant Ferris Wheel at Mtatsminda Park for some spectacular views of the city of Tbilisi or go swimming with the dolphins at Batumi’s Dolphinarium.

While Georgia is blessed with year-round favorable climate, the months of March and May are most popular amongst tourists. Summers are hot and humid while winters can get cold. Snowfall is common on the majestic peaks of the Caucasus mountains thereby attracting sports enthusiasts and ski lovers.

Don your traveler’s hat and get ready to explore this mysterious yet fascinating Caucasian gem. Brimming with ancient landmarks, majestic mountains, palatable cuisine, breathtaking scenic locales and more, Georgia has much on offer. 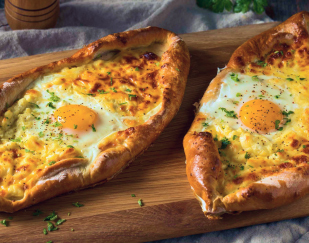 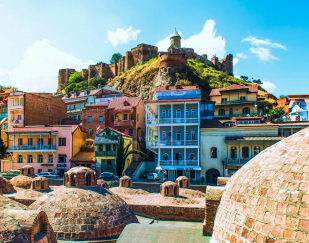 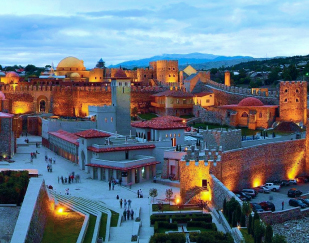 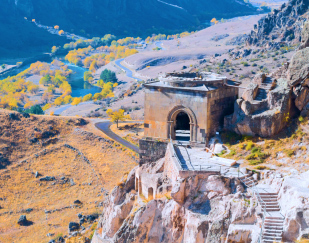 Any trip to Georgia would mandatorily begin at the showpiece town of Tbilisi which is also the capital city of this beautiful country. Tbilisi is an eclectic concoction of the ancient and modern with cobblestoned alleys lined with modern buildings, rustic homes and lovely courtyards. It is also home to one of the highest orthodox churches in Europe. The city is brimming with exotic marketplaces, sublime churches and ancient architecture. Don’t forget to gorge on some mouthwatering Georgian cuisine when in Tbilisi.

Located on the banks of the vibrant Black Sea, Batumi is referred to as Georgia’s seaside resort town. The charming city is alive with quirky street art, modern futuristic buildings, ancient clock towers and quaint old town square worth visiting. The city is also home to some of Geogia’s most happening pubs, casinos and restaurants. Take ride on the Argo cable car located on Anuria Mountain at sunset for a mesmerizing ariel view of the city wrapped in a golden halo.

Located around 220 kilometers west of Tbilisi on the banks of the Rioni River, Kutaisi is one of the oldest cities og Georgia. It is home to several cases, monasteries, cultural landmarks and cathedrals.

Borjomi is best known for mineral waters that owe its origins to the now dormant volcanoes of the region. The hot waters of Borjomi is believed to have medicinal values and were used to fill baths as well. This unique feature of the Borjomi mineral waters attracted the attention of Mikheil Romanov who ordered Gustav Eiffel to build a bridge next to the Borjomi-Bakuriani railway tracks. The bridge, which was completed in 1902 makes the area more attractive to tourists. Visitor may also visit the fancy Borjomi National Park and soak in the stunning natural beauty of the surrounding hills.

Located in the northern part of Georgia, Mestia is a mesmerizing mountain town that provides with numerous hiking trails that will leave you lost amidst nature. You may hike up to the Ushaba glacier simply go on a horse ride in the alpine countryside. Visit the Svaneti Museum of History and Ethnography to learn more about the Svaneti culture and history.

Mtskheta embodies the true essence of Georgia. One of the oldest cities of the country, Mtskheta is home to several UNESCO World Heritage Sites including the renowned Jvari Monastery and the Svetitskhoveli Cathedral. A visit to Mtskheta tops the bucket list of any Georgian tour itinerary.

Known as the wine producing district of Georgia, Khakheti is home to some charming ancient vineyards that produce world class wine. You may go one a wine tasting tour sample some of the finest red, white, rose as well as sparkling wines.

Swim with Dolphins at Dolphinarium in Batumi

Hitchhiking in Georgia – Its legit!

Paragliding over the stunning mountain ranges of Georgia

Located outside the city of Kutaisi, Prometheus Cave is a long 1.4 mile stretch of spectacular landscapes that include rock formations like stalactites, stalagmites, underground rivers, lakes and petrified waterfalls.

The cave claims to be the house of the boulder to which Prometheus was bound. There are several ways of exploring the caves.

You may avail a boat tour on the underground rivers or simply walking along the neon-lit pathways.

The pillar is steeped in ancient pagan and Christian folklore. Once on top, you may enjoy breathtaking views of the surrounding hills and valleys.

Carved on the sloped of the Erusheli mountain near Aspindza in Southern Georgia, Vardzia is a massive cave town and fortress initially built to protect the country against Mongol invasions.

With 13 levels and 6000 apartments, the fortress is an archeological wonder. It is also home to one of the ancient orthodox churches of Georgia, The Church of the Dormition built in the 1180s during the Golden Age of Queen Tamar.

Located right outside Tbilisi, Narikala fortress initially build for the city’s defense against Mongols, is as old as the city itself.

No trip to Tbilisi is complete without a visit to this magnificent 4th century fortress that overlooks the Mtkvari River and offers spectacular view of the city at every step.

The fortress is also home to the ancient 12th century St. Nikolos church. A hike along the Narikala tourist route from the Mother Georgia Statue to the botanical gardens is highly recommended. The most attractive feature of this destination is the cable car journey to the summit which is both inexpensive and breathtaking.

Another sparkling gem in the list of orthodox churches in Georgia, the Tbilisi Holy Trinity Cathedral also called Tsminda Sameba is an indispensable feature of Tbilisi.

This stunning structure showcases fine Georgian architecture combined with Byzantine shades. Located above the left bank of the Mtkvari River on Ellia Hill, is easily accessible by metro from the Avlabari Metro Station.

A UNESCO World Heritage Site, the Jvari Monastery standing tall and high above the city of Mtskheta is of utmost importance in Georgian culture and religion.

This is believed to the exact location where St. Nino, a female evangelist erected a wooded cross in a pagan temple and marked the beginning of Christianity in Georgia.

Located in the southern slopes of the Caucasus mountains near Mestia, the Chalaadi glacier offers a beautiful walking trail by the Mestichala river valley.

One may enjoy a quiet walk on a warm summer day, along the river, get close to the forest zone and enjoy some of the mountain streams like Dalaqori, Chatini and Bzhedukhi.

Located in the city of Mtskheta, the Svetitskhoveli Cathedral constructed in the early 11th century is a UNESCO World Heritage Site.

This architectural wonder is more like a gated community that includes an ancient orthodox church, a bell tower, residences and castles within the premises.

According to a popular Georgian belief the seamless robe of Christ was buried here.

Present day Rabati castle was officially opened in Akhaltsikhe in August 2012. The fortress is fascinating blend of Jewish, Christian and Islamic influences in the country.

The castle houses an ancient church, a mosque, a museum, a minaret and a synagogue.

This is a SAMPLE itinerary. Our Georgia tour packages from India are customizable to suit your preferences

Arrive at Tbilisi. First thing, gorge on some freshly baked meat pie and khachapuri. Spend this day exploring the capital city. Walk around the old town while shopping at the flea markets and pick up souvenirs and gifts. Next up is the Holy Trinity Cathedral of Tbilisi. Marvel in this magnificent structure and create some lifetime memories. At sunset take a cable car to the summit of the Narikala fortress. Dont forget your camera!

After breakfast drive to the nearby Khakheti wine district. Spend this day tasting some of the finest locally produced wines. Post lunch drive to Mtskheta to visit the Svetitskhoveli Cathedral, a UNESCO World Heritage Site.

Next morning, get set to travel to Borjomi, one of the oldest and most fascinating towns of Georgia. Fill up your water bottles with the natural mineral waters and deep your feet in the warm waters of Borjomi for the most relaxing and rejuvenating experience. Next up, take a quick visit to Borjomi National Park to experience pristine natural beauty of the surrounding hills.

On your 4th day take a bus to Mestia. The journey is long but its worth. After a daylong journey relax in the evening and indulge in some Svan cuisine

Early morning embark on a trip to Ushguli, the highest settlement in Europe and a UNESCO World Heritage Site. You may also hike along the numerous trails along the lake and glaciers. Svaneti Museum of History and Ethnography to catch a glimpse of medieval weapons, silver and copper ornaments, textiles and much more.

Travel back to Tbilisi. Spend your last day in Georgia by indulging in some mouthwatering dishes like Khinkali (A typical Georgian dumpling), Mtsvadi or grilled meat and Kharcho. Make sure take lots of pictures for your friends and family back home. Strategic location, favorable weather conditions throughout the year, stunning mountain ranges, rolling green valleys, iconic landmarks and locations soaked with history and much more add to the charm and beauty of this Transcaucasian country. While planning a holiday Georgia in Eurasia should rightly be on your bucket list.

Cost of a trip depends on destinations you plan to visit, the duration of the stay, the class of travel and accommodation and the inclusions you seek.

We have years of experience in conducting European tours. Let us at Flying Squirrel Holidays get the best deal for you.

What is the best time to visit Georgia?

The best time to visit Georgia is between May and September.

What modes of transportations are available to travel around Georgia?

There are buses, taxis, metro, and railway that helps to travel around Georgia. One of the best ways to explore Georgia is by hiring a car that gives you flexibility and safety.

Where is Georgian cuisine influenced from?

The Georgian cuisine is influenced by the Eastern Europe region, Caucasus region, and also some Middle Eastern flavors as well. Khinkali is a must-try out there!